This 1965 Ford Mustang, but more commonly referred to as a 1964 1/2
Mustang is all about looks and style. This Classic vehicle has a good
running Engine Code F, the original 260 C.I. engine pushing out 164
ponies stuffed into the Poppy Red engine compartment. Mated to a 3 speed
automatic transmission, this filly is sure to please the utmost of auto
enthusiasts ! This vehicle is 1 of the very early, first ‘Stangs to come
to market. The 1964 1/2 Mustang, when first opened for orders from Ford,
received 22,000 orders on the very first day when it was introduced at
the Flushing Meadows Park World’s Fair in Queens!  This vehicle became
an absolute sensation with consumers from Day 1. Produced after July 31,
1964 in Dearborn, MI, this pony is built to run and look great doing it.

The current Owner has owned this beauty for about 4 years, where the
vehicle migrated from sunny Florida to the beautiful hills of North
Georgia, has taken extremely good care of it and has been very
instrumental in bringing it up to show grade.  Although not a rotisserie
rebuild, any and all rust has been eradicated from the chassis and
frame. All new floor pans have been installed, as well as any rust
treatment on all body panels  and rear deck components. The paint is a
highly polished, mirror image Poppy Red, sure to bring back thoughts of
the old times at the local drive in.

Having just completed a major service with all the drum brakes
inspected, with good brake linings on all 4 corners,    brake fluid
flushed and purged, new carburetor, ignition distributor, voltage
regulator and generator replaced and installed, this Pony is ready for
the trail.  All new wiring from the instrument cluster forward has been
replaced, as well as wiring rearward from previous projects. Factory air
conditioning works well, a great reliever with the top both up or down!
There are no backup lights, as this was an option back then. The hubcaps
are of the original “Spinner” type.

The original 1964 1/2 Mustangs, have become, are and remain an extremely
high and sought after collectable car for enthusiasts and aficionados
alike. With very few numbers remaining, and even fewer pristine examples
available, this legend is certain to provide enjoyment, satisfaction and
reliability in day to day ownership.

Auction failed because there were no bids

Got something to discuss? 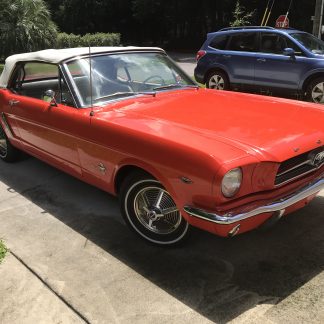